KNOW WHAT DOES COLOUR CODING ON NUMBER PLATE MEAN ! 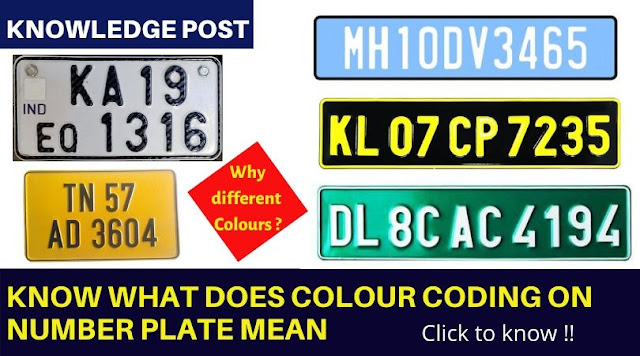 As per the Motor Vehicles Act of 1988, no vehicle can be driven by any person in public places in India until it is registered by a registering authority. When the registration process of a vehicle is complete, it is assigned a number plate which is known as the official number plate. There are various types of number plates in India.Every number has a different colour coding which signifies a unique meaning.We will understand the meaning of various number plates and their meaning in this article.

A license plate is a combination of alphabets and digits that form a registration number. The license plate is issued by the district RTO (Regional Transport Office) and should be placed in the front and the back of the vehicle with provision for illumination. The international registration code for India is IND. 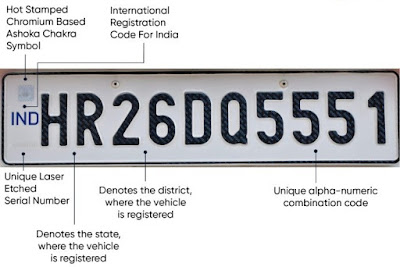 There are various parameters that decide which vehicle bears which coloured number plate.

Cars bearing black lettering on a white background are private vehicles. These are used solely for private purposes and can't be used for any commercial purpose like goods transport, ferrying passengers etc. 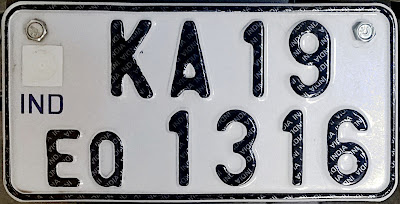 These are commercial vehicles like taxi, cabs, trucks. Yellow number plates have a different tax structure compared to white number plates and commercial car drivers with yellow plates are also mandated to have a commercial driving permit.

These are commercial vehicles available on rent for self-drive. These cars can be put to any commercial purpose without the limitation of the driver having to own a commercial driving permit.

This number plate is limited to electric cars only. This is applicable to road-legal electric buses and other electric commercial vehicles (like Mahindra e20, Tata Tigor Electric,Tata Nexon EV). 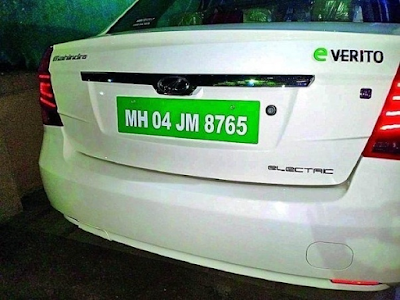 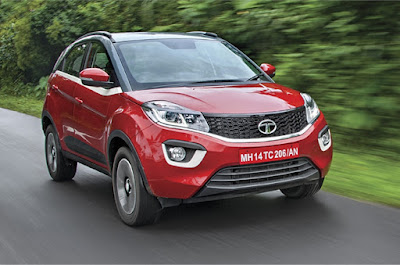 Number plate with an upward-pointing arrow

Military vehicles follow a unique numbering system unlike any other license plate numbers. The numbers are registered under the Ministry of Defence, New Delhi. The first/third character is an upward-pointing arrow, known as a Broad Arrow, used in many parts of the British Commonwealth. The two digits succeeding the arrow show the year in which the Military procured the vehicle. 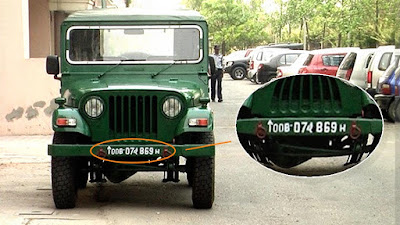 Overall, a vehicle plate number has lot of components which are essential for any driving license holder to know.
on April 02, 2020 No comments:
Email ThisBlogThis!Share to TwitterShare to FacebookShare to Pinterest

KNOW WHY GASKET IS USED IN ENGINE ! 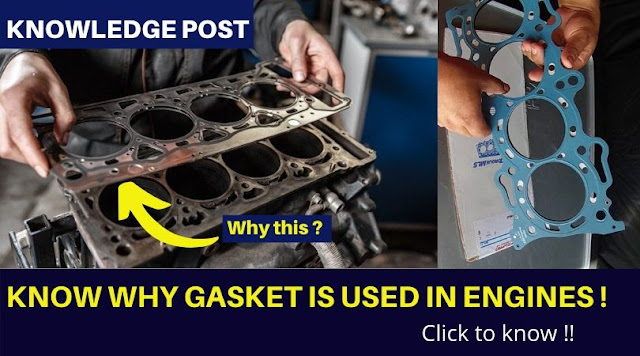 You might have seen a rubber or strip like structure when you disassemble an engine.This rubber like structure is called gasket.We will know the importance of gaskets in engines in this article. 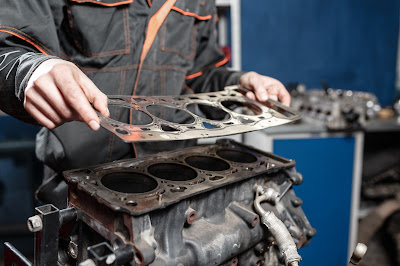 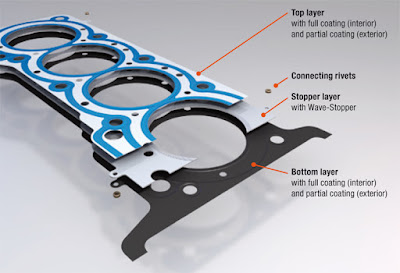 The head gasket in modern vehicles is comprised of several layers of steel material entwined with elastomer, making them more durable and longer lasting. Vehicles produced in the past were equipped with gaskets created by graphite or asbestos. In comparison, today’s gaskets are better as they are less prone to leakage and have little to no health risks as opposed to asbestos produced gaskets. 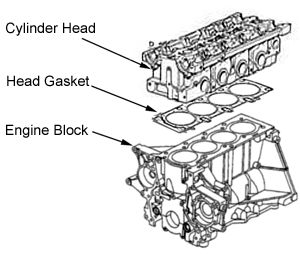 The main functions of head gasket as as follows:


1.)The gasket joins irregular surfaces (we speak in terms of millimeter microns). For this reason, it is necessary to insert a softer material, such as a fiber or an elastomer between both surfaces which is able to adapt to those imperfections, which ensuring a perfect sealing.

2.)It maintains the sealing need and prevent leakage between the two crucial engine parts, when being subjected to the compression process. 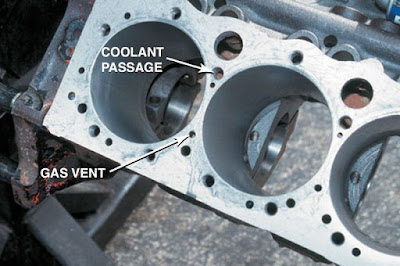 3.)The gasket performs the task of separating the passage of oil and water that pass through the block and cylinder head of the engine.The head gasket keeps the chambers separated to ensure there is no cross-contamination of fluids.


4.)It prevents dust and dirt from getting into the engine and causing damage. 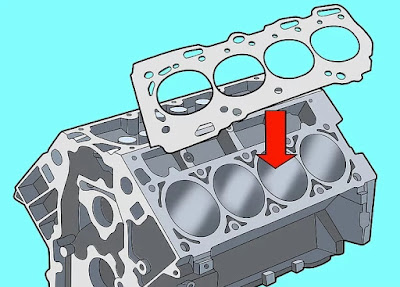 Various materials can be used in the manufacture of gasket: rubber, silicone, metal, cork, fiber or polymers.On certain occasions it may be found that the compression in the cylinder creates a perforation, or hole in the head gasket; generally known as a blown head gasket. 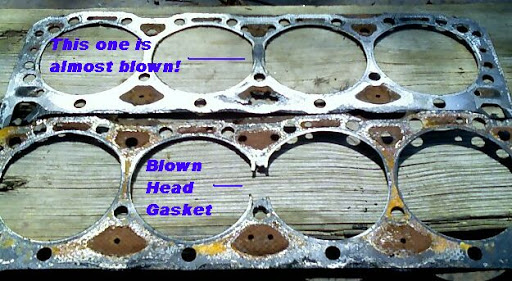 When the head gasket has blown, it’s critical that it be addressed immediately. Continuing to operate a vehicle with a blown gasket can cause serious and irreparable damage to the engine. When gasket is blown, you may notice a few or all of the following symptoms:


>Overheating – Caused by a lack of or reduced coolant. Also caused by hydrocarbons entering the cooling system.

>Loss of Power – Due to a lack of compression resulting in sputtering, loss of power, and reduced fuel efficiency.

>Discolored Oil – A chocolate milk-looking oil is indicative of coolant mixing with oil in the engine.

So,next time when you face above problems, do not forget to check your gasket once.Thank you for reading this article.
on April 01, 2020 2 comments:
Email ThisBlogThis!Share to TwitterShare to FacebookShare to Pinterest

DIFFERENCE BETWEEN PIPE AND HOSE EXPLAINED ! 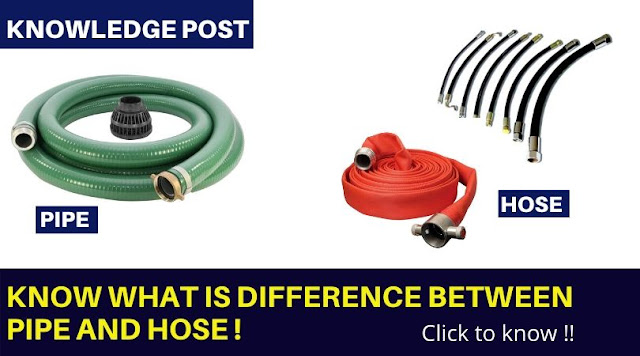 Transportation of fluids uses different types of tubes, among which most commonly used tubes are hoses and pipes. They are efficient in transferring liquids from one point to the other.We will discuss the difference between hose and pipe in this article.

A pipe is a hollow cylinder or tubular section, which is used in conveying substances that flow. They are typically utilized for structural applications, fabrication and railings. Tube and pipes can be interchangeable. However, when it comes to engineering and the industry, these terms have separate definitions. Pipes are usually put up for long-term purposes. The flow of the liquids is supported by tees and elbows. 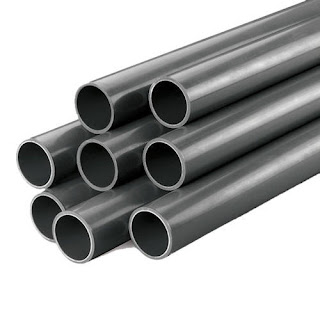 A hose is a hollow-shaped tube created to transmit fluids from one point to the next. Hoses are built based on application and performance. They are usually designed based on their Pressure rating, weight, length, coil hose, straight hose and chemical compatibility. There are various types of hose based on their applications, such as garden hose, fire hose or air hose. They are usually used with spigots or clamps in order manage water flow. 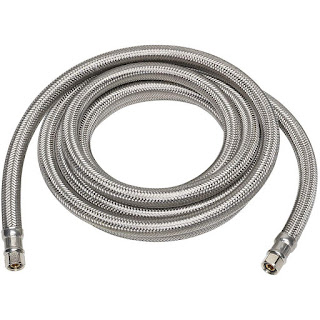 Difference Between Hose and Pipe:

>A hose is a hollow-shaped tube created to transmit fluids from one area to the next.

>A pipe is a hollow cylinder or tubular section, which is used in conveying substances that flow.

>A hose is smaller than pipe.

>Hose is composed of a more flexible material compared to pipes that are composed of rigid tubes.

>Hoses are a combination of various materials from polyurethane, polyethylene, nylon and natural or synthetic fibers while pipes are made from fiberglass, metals, ceramic, plastic and concrete.

>A hose generally has a circular cross section while pipes may or may not have one.

KNOW WHY PLASTIC COVER IS USED OVER ENGINES IN CAR ! 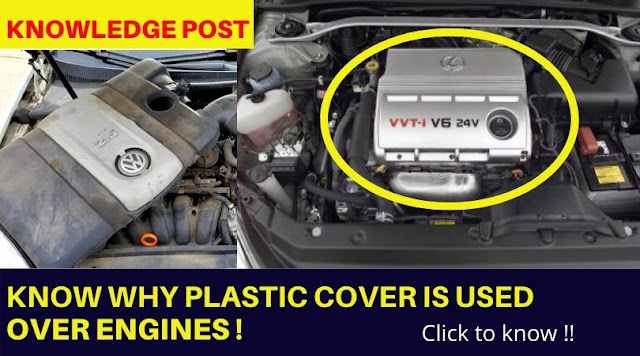 There is one thing you will notice under the bonnet of a modern car that is use of plastics over engine. But why every single car has these plastic engine covers? Why do car manufacturers bother to spend extra time and money to make them?We will answer all these questions in this article. 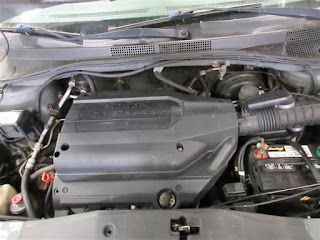 Under the plastic cover we have fuel lines,spark plugs,fuel injectors,alternator and many other mechanical components.Plastic cover is used with engine to serve following purpose:

1.) A plastic engine cover hides wires and fuel lines, while making them still quite easily accessible. A nicely dressed engine bay typically means that some components can be hard to reach for repair. When you have a big piece of plastic hiding everything, you don’t have to worry about the looks – it is the cheapest way to keep the engine bay looking tidy. This is equivalent to cleaning the mess off of your desk straight into the drawer – out of sight, out of mind. 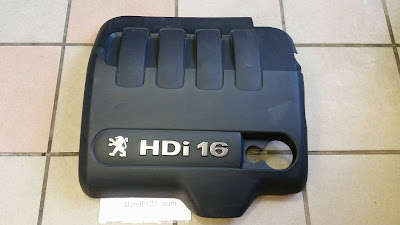 2.) It provides good insulation that gives a cooler surface that are safer for the general person to interact with. This also helps keep the bonnet cooler.

3.) Plastic engine covers can be heat-resistant and absorb vibrations, making the sound of the engine just that little bit quieter. 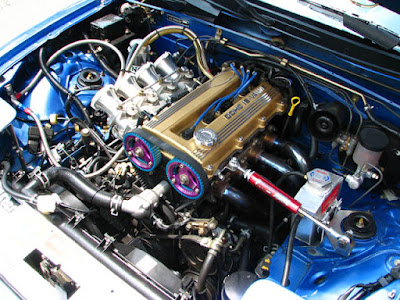 4.) Cover keeps fluids below the cover. In a car with high speeds, usually more oil splatter and coolant being thrown around, up on the hood, etc. If you take cover off, you would find some oil, grease and/or dried coolant under it.

5.)Plastics are easily manufactured to cover the complex engine shape, light weight and are inexpensive.

So,these are the reasons for the use of plastic cover over engine. It is likely that in the future, engines are going to be tucked away even more and not accessible without specialized equipment.

on January 19, 2020 No comments:
Email ThisBlogThis!Share to TwitterShare to FacebookShare to Pinterest 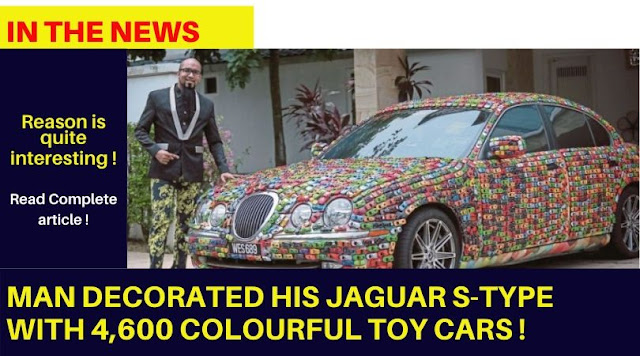 Malaysian businessman named Datuk Seri Mahadi Badrul Zaman, the CEO of Financial Genius Team, has been turning heads with his unique ride all around Kuala Lumpur.The businessman, who is an avid Hot Wheels toy collector, decorated his prized Jaguar S-Type with 4,600 colorful toy cars from his collection. 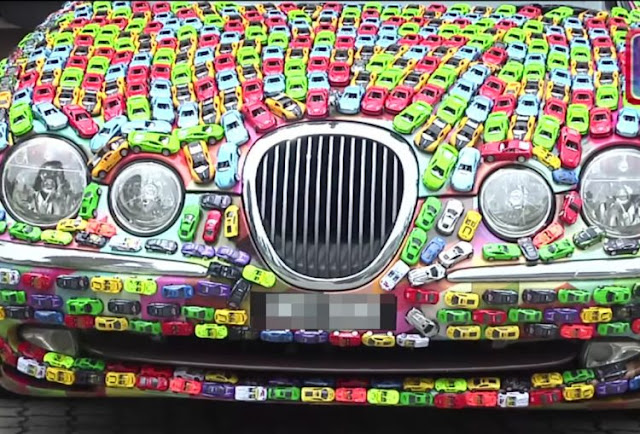 Reports of an unusual-looking Jaguar S-Type limousine covered in thousands of miniature cars driving around the Malaysian capital had been circulating on social media for a few weeks, but no one knew anything about it, who the owner was or if it was just some sort of marketing stunt. 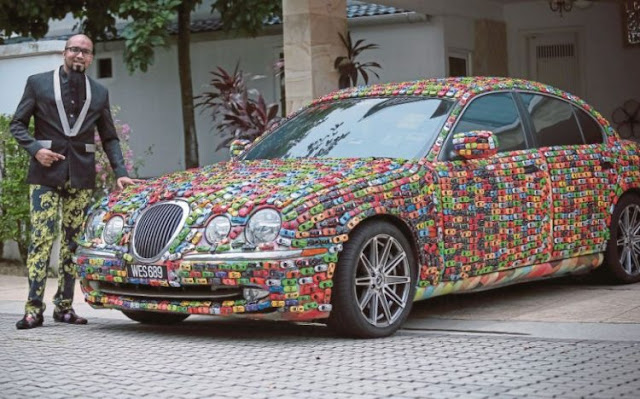 The owner stats the reason behind this that he has been a Hot Wheels car enthusiast since he was 13, and now is the proud owner of around 5,000 vehicles, 4,600 of which are as an attachment stick with glue to his car. 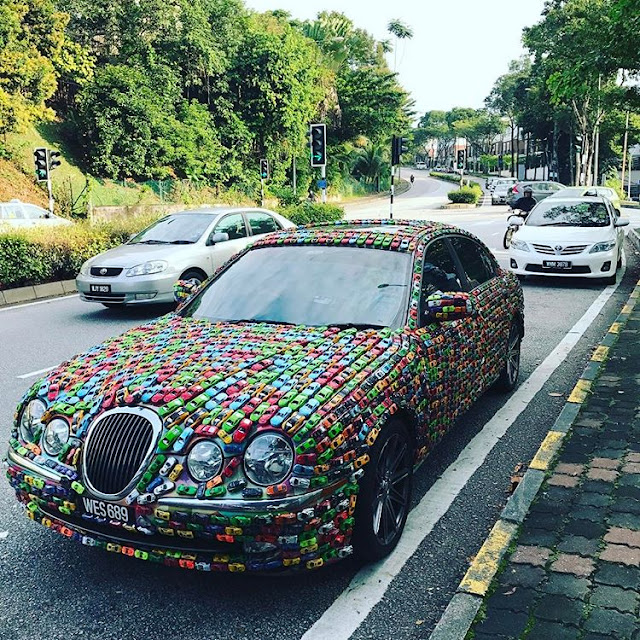 It definitely looks different, but I’m guessing the maintenance for such a “paint job” has got to be a nightmare. You can’t park it anywhere for fear that someone’s going to yank a toy car off the car, and cleaning it can’t be very easy either. But if you’re an attention seeker, this is definitely an eyeball magnet.